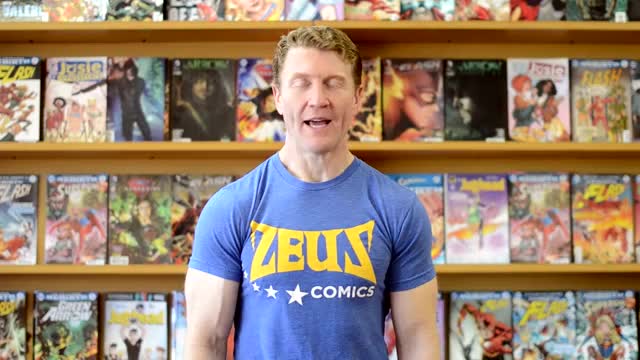 This one took me by surprise, fans. As a jaunt into the Thinker's lair goes awry, our Flash Squad lose their few advantages against the thinker in a shocking ending. Which brings me to this week’s flashpoints

There he is. No there he isnt!

When Ralph and Barry scour the bus for clues to our final dark matter meta their scanners produce images of Edwin Gauss appearing and disappearing. But thanks to a pocket dimension alert, our heroes suit up to discover Edwin Gauss the folded man who can jump between dimensions! Aha! Our heroes realize how valuable Gauss would be for the Thinker to absorb. With Gauss' powers Devoe wouldn't need his chair to teleport in and out of own pocket dimension lair

I've got the power

Joe West is on the mystery of Harry's obsessive use of his intelligence booster. Intervening when he recognizes the same addiction qualities he saw in his wife Francine. Harry who in fact has been using dark matter in the device thanks to help from season one computer AI Gideon briefly sets the intelligence booster aside when he roughs up Cisco looking for the cap.

But when the Devoes raid Star Labs, Harry returns to the cap turning the dark matter meter to 110% causing Harry to tumble to the floor. Unbeknownst to Harry, the Thinker predicted this outcome as the Thinker gathers this excess dark matter to create some form of device to power enlightenment and burn down team Flash

They all Fall Down

Early back and forth between Ralph and Barry may have given us a glimpse in the ending but it was still a shock. Ralph is the only one of our Flash squad willing to kill Devoe - as he put it to save his friends. Barry being the hero optimist convinces ralph otherwise. It’s a common theme in comics, that the hero doesn't kill. After Barry stops an attempt by Ralph to get Gauss to take him into Devoe ‘spocket dimension, our heroes riffing off Ralph’s idea vote to take the fight to the Thinker not guessing the Thinker has foreseen this outcome.

Flash, Vibe and Killer Frost teleport into Devoe's lab right as Marlize and Izzy Devoe jump into Star Labs to get the remaining metas. It's Joe versus Samuroid, Marlize versus Iris as our non-powered characters get a chance to fight. And it's awesome... that is until Ralph comes face to face with Edwin Gauss now Edwin Devoe. Around Edwin Devoe, down and dispensed are Null, Melting Pot and Izzy Bowen. Ralph pulls the sonic scepter out which takes down Devoe. But it's not enough to prevent Devoe from escaping his power damping cuffs and taking his final victim Ralph Dibny Elongated Man in full view of Barry.

What a devastating loss. The Elongated Man is a prominent character in the 1980s and 1990s DC Universe. I wasn’t expecting to lose him. With Ralph's malleable form, Clifford Devoe is able to morph into his Clifford visage. Ralph’s power set also stabilizes the dark matter effects that were causing Clifford's various bodies to decay. Also of note... while battling Ralph Devoe, Killer Frost loses her powers by the touch Melting Pot power swapping abilities

Ah - but fans... we have one dark matter left. Remember Fallout from Trial of the Flash? Neil Borman returns as does episode guest star Citizen Cold! With Killer Frost powerless, Cold may be the only person to keep Fallout from going nuclear. Can Fallout be the key to Devoe's defeat? Or is the Flash Squad offering him protection?

Five episodes remain as we race to the end. Its a brand new Flash "Fury Rogue!"