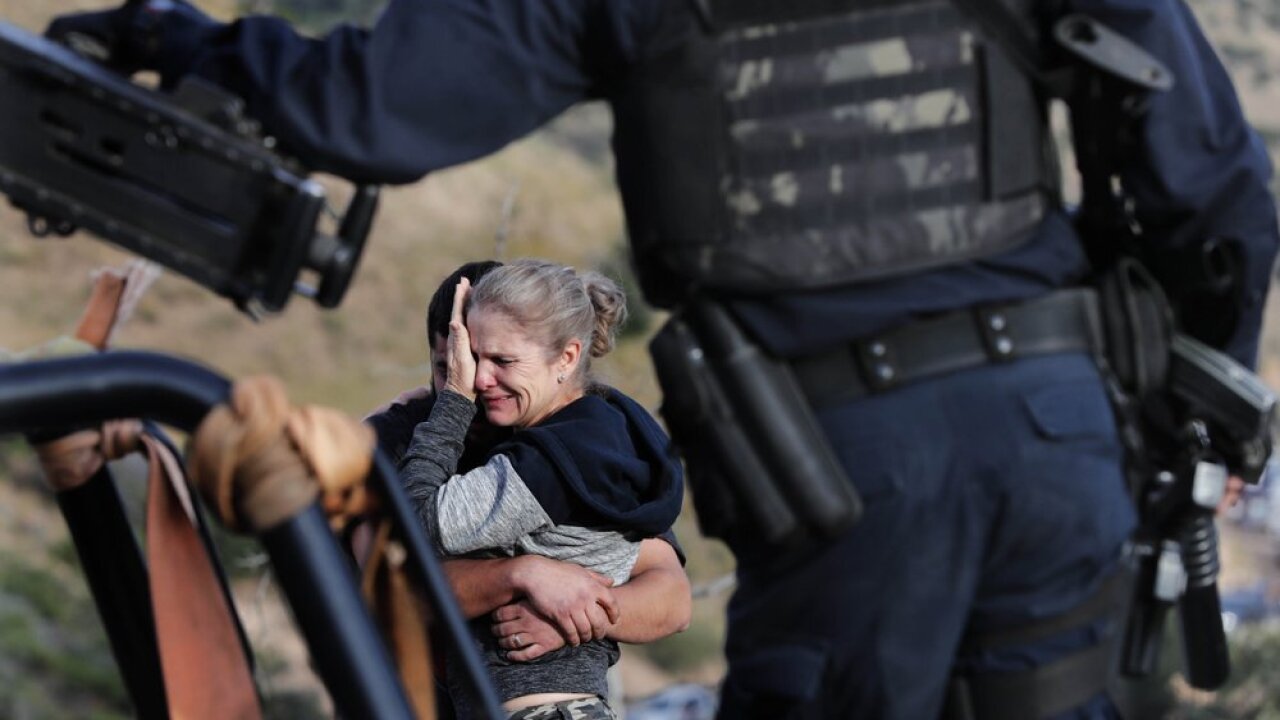 Under a strong security presence, this remote farming community prepared to hold the first funerals Thursday for some of the nine American women and children killed by drug cartel gunmen.

Dozens of high-riding pickups and SUVS, many with U.S. license plates from as far away as North Dakota, bumped across dirt and rock roads over desert, arid grasslands and pine-covered mountains Wednesday as night fell on this community of about 300 people. Many of the residents are dual U.S. and Mexican citizens who consider themselves Mormon but are not affiliated with The Church of Jesus Christ of Latter-day Saints.

At least 1,000 visitors were expected to bunk down in the hamlet overnight ahead of Thursday’s funerals, filling floor space in the 30 or so homes or sleeping in tents they brought with them. At least one cow was slaughtered to help feed the masses, as well as the few dozen Mexican soldiers guarding the entrance to La Mora.

Steven Langford, who was mayor of La Mora from 2015 to 2018, said he expected the killings to have a “major” impact on the community. Once upon a time he didn’t think about moving around the area in the middle of night, but in the last 10 to 15 years things “got worse and worse and worse.” As many as half of the residents could move away, he feared.

“It was a massacre, 100% a massacre,” said Langford, whose sister Christina Langford was one of the women killed. “I don’t know how it squares with the conscience of someone to do something so horrible.”

When gunmen opened fire on them Monday, the Mexican army, the National Guard and Sonora state police were not there to protect them. It took them about eight hours just to arrive.

To many, the bloodshed seemed to demonstrate once more that the government has lost control over vast areas of Mexico to drug traffickers.

“The country is suffering very much from violence,” said William Stubbs, a pecan and alfalfa farmer who serves on a community security committee in the American-dominated hamlet of Colonia LeBaron. “You see it all over. And it ain’t getting better. It’s getting worse.”

The lack of law enforcement in rural areas like the northern states of Chihuahua and Sonora once led the dual U.S.-Mexican residents of places like Colonia LeBaron to form their own civilian defense patrols.

Stubbs said that after the 2009 killing of anti-crime activist Benjamin LeBaron, residents positioned themselves each night for two years with high-powered binoculars to keep watch from the large “L″ for “LeBaron” that stands on a hillside above the town.

Since then, he said, the cartels have left Le Baron and the town of Galeana a few kilometers to the north alone. But he said they have watched the cartels get stronger in the past two decades, with nearby communities in the mountains suffering from violence and extortion.

This week, he said, the military told him that the town of Zaragoza had been about 50% abandoned.

The army’s chief of staff, Gen. Homero Mendoza, said Wednesday the attack that killed three American mothers and six of their children started at 9:40 a.m. Monday, but the nearest army units were in the border city of Agua Prieta, about 100 miles (160 kilometers) and 3½ hours away.

Soldiers didn’t start out for the scene until 2:30 p.m. and didn’t arrive until 6:15 p.m. — even while five surviving children lay hiding in the mountains with bullet wounds.

“There are areas where the government’s control is very fragile,” said Alejandro Hope, a Mexican security analyst.

President Andrés Manuel López Obrador created the militarized National Guard after he took office last December to help law enforcement, but its 70,000 troops have to cover a vast territory.

“The government’s main policy tool, the National Guard, is not where it should be,” Hope said. “It should be in the mountains, and it’s not there.”

He noted that Sonora and Chihuahua states, with over 160,000 square miles (420,000 square kilometers) between them, have only about 4,100 National Guard agents stationed there, or about one for every 40 square miles.

Questions have also arisen over whether the army can do its job even when it is present. On Oct. 17, in Sinaloa state, soldiers were forced to release the captured son of imprisoned drug lord Joaquin “El Chapo” Guzman to avoid further bloodshed after Sinaloa cartel gunmen counterattacked in greater numbers in the city of Culiacan.

Colonia Le Baron is a place where the U.S. influence is evident everywhere: pickup trucks with license plates from California, Idaho, Colorado, Washington, and English-speaking customers eating hamburgers at Ray’s Restaurant, Coffee & Grill. Many of the dual citizens were born here, and their families have been here for decades.

Stubbs predicted that some people will move their families to the United States out of fear but will ultimately come back, as happened after the 2009 killing.

“I’m really shocked actually of his way of thinking, and it ain’t going to solve the problems,” Stubbs said.

Residents know they can’t fight the cartels on their own.

“We’re not experts in military and war and weapons,” Stubbs said. “We’re farmers, and we have great families and big families, and we definitely want our families to be peaceful.”

Mexican officials said the attackers may have mistaken the group’s large SUVs for those of a rival gang. The Juarez drug cartel and its armed wing, known as “La Linea,” or “The Line,” are fighting a vicious turf war against a faction of the Sinaloa cartel known as the “Salazar.”

“Those who attacked the occupants (of the vehicles), they let the children go, so we can deduce that it was not a targeted attack” on the families, said Mendoza, the army chief of staff.

Most of the victims lived in La Mora, about 70 miles (110 kilometers) south of Douglas, Arizona. Many in the hamlet are related to the extended LeBaron family.

The killers were believed to be from La Linea, whose gunmen entered Sinaloa cartel territory the previous day and set up an armed outpost on a hilltop near La Mora and an ambush farther up the road. The Juarez cartel apparently wanted to prevent Sinaloa gunmen from entering their territory in Chihuahua state.

On Wednesday dozens of army soldiers, federal and state police and National Guard troops provided security along the bumpy route from Chihuahua state to La Mora, in neighboring Sonora, retracing in reverse the route the victims were on when they were ambushed. People in the caravan clapped the agents on the back in thanks and gave them food, bottles of water and baseball caps.

Langford said he and others come and go frequently between La Mora and the United States, working north of the border to build lives and families in a place he described as a “paradise” for children to grow up. Behind the lot where he and his wife raised 11 kids, they are fond of fishing and swimming.

“We’ve always known the dangers. We’ve seen the people doing their deal. We always had the policy, ‘We don’t bother them.’ We never dreamed something like this could happen,” said Langford. “Now this place is going to become a ghost town. A lot of people are going to leave.”