In Aedrin Albright's civics class at Chatham Central High School, the students are getting a real-life lesson in politics as their lesson on impeachment occurs at the same time as the impeachment hearings in Washington, D.C. 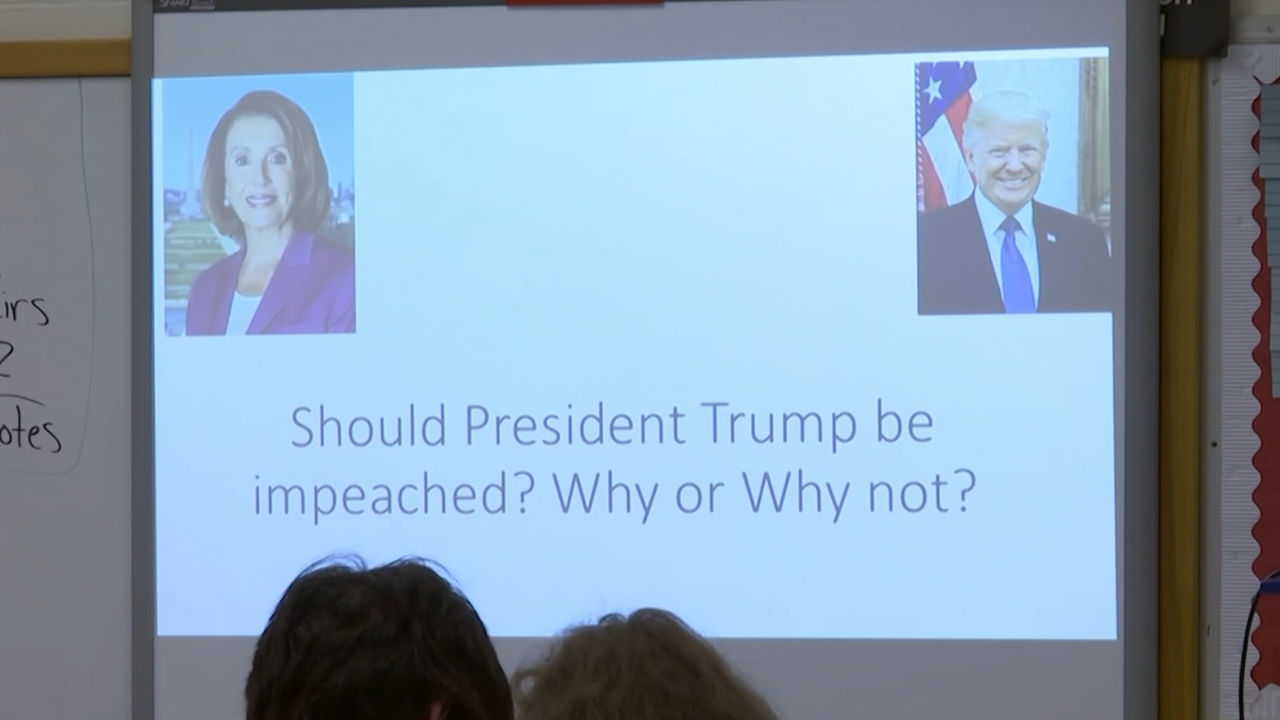 In Aedrin Albright's civics class at Chatham Central High School, the students are getting a real-life lesson in politics.

The Bear Creek, North Carolina 10th graders are studying the impeachment process. And as their representatives hear testimony against President Donald Trump in Washington, they are debating whether he should face removal from office.

"Your job is to try to persuade your classmates in here to come to your side, to your understanding," Albright says to her class. "To see how you see this impeachment process."

"I don't think it's my job as a teacher to influence them politically," Albright says. "I think it's my job to teach them the two sides, or the three sides or the four sides. So, it's not my job to say, `Yes, he should be impeached.' I've had them, probably, eight or nine times, 10 times: `What do you think?' And it's like, What do YOU think? And so it's, you know, I want them to tell me instead of me telling them."

Bryce Hammer thinks the process is rigged and that Democrats are simply looking for any excuse to oust the Republican president.

"The Democrats have just been slamming Trump and trying to find every little thing, ever since he got into office," Hammer says. "Just to try and get a reason just to kick him out and impeach him."

"He was just doing his job," Hackney says. "Do you want him to not talk to other nations?"

But pro-impeachment supporter Francisco Morales noted that Trump made the call to Ukraine just a day after a special prosecutor declined to charge him with seeking foreign help in the 2016 election.

Emma Preston sat in the middle, but thinks the impeachment is a waste of time and money so close to the election.

"There shouldn't be an impeachment process going on when there's about to be a re-election," Preston says.

But Makizah Cotton says the framers included impeachment in the Constitution as a way to check the power of the presidency, and that questions should be investigated.

"I think that we shouldn't let anything go," Cotton says. "And that's with any president."

Before the class was over, three students had moved from undecided to anti-impeachment. One undecided student went to join her three pro-impeachment classmates.

Albright has been teaching civics for 18 years. She says her students' performance and preparation make her hopeful for the future.

"I have hope," she says. "These kids give me hope, every day. In our future."

(Copyright 2019 The Associated Press. All rights reserved. This material may not be published, broadcast, rewritten or redistributed.)