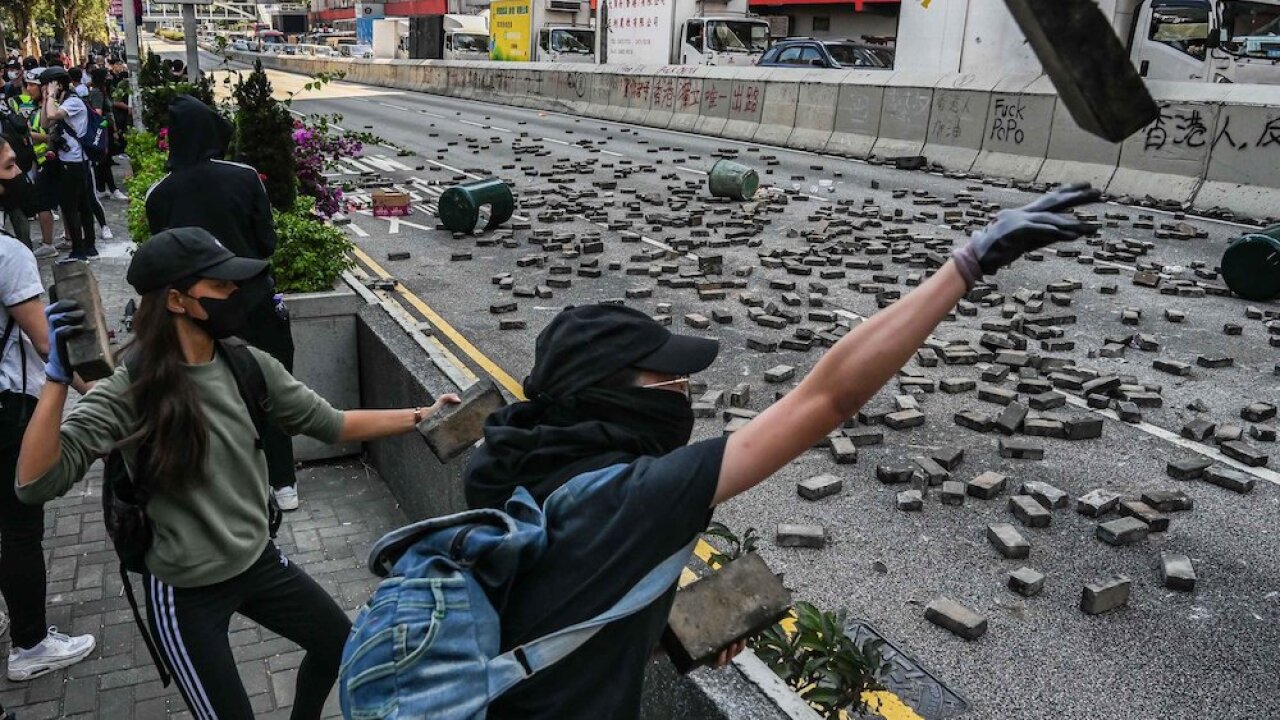 A man has been set on fire in Hong Kong only hours after a protester was shot by police with a live round, as the city experiences one of the most dramatic days in over five months of protests.

Protesters began disrupting transit as early as 7 a.m. local time as part of a day-long general strike, and clashed with police in several locations. In Sai Wan Ho, on eastern Hong Kong Island, a traffic police officer shot a 21-year-old protester in the torso.

The protester was in a critical condition on Monday morning, but by the afternoon, police said there was no immediate threat to his life. The shooting sparked public outrage, escalating what had already looked to be a long day of demonstrations.

In a separate incident, a man who confronted a group of pro-democracy protesters was doused in a flammable liquid and set alight, according to a graphic video seen by CNN and widely shared on social media. The video shows an unidentified and unarmed man shouting expletives at protesters before saying "you're all not Chinese."

The man is in hospital in a critical condition, the city's Hospital Authority told CNN. A Hong Kong police source said that they are investigating the incident which took place on Monday at the Ma On Shan subway station in the New Territories.

Skirmishes continued through the evening as protesters called for another round of demonstrations on Tuesday, according to flyers shared online.

She said the escalating unrest was bringing Hong Kong "to the brink of no return" and the government would not yield to protestors demands.

"If there is any wishful thinking that by escalating violence the (Hong Kong) government will yield to pressure to satisfy protesters' so-called demands, I'm making this clear that will not happen," she said.

The day saw protesters hurl petrol bombs, set fires, build barricades and disrupt transit in several locations, including the crucial cross-harbor tunnel that connects Hong Kong Island with Kowloon. In total, demonstrators vandalized or blocked roads in over 120 locations around the city, police said at a press conference on Monday afternoon.

"We appeal to everyone to please stay calm and rational," Tse Chun-Chung, Hong Kong Chief Superintendent of Police, said. "Continuing this rampage is a lose-lose situation for Hong Kong -- everyone is a loser."

Tse said a police officer has been suspended from front line service after driving a motorbike through a crowd of protesters in Kwai Fung, in the New Territories. But he said that while his officers were under great pressure, they were not out of control.

Office workers in the city's Central financial district have been sent home as riot police fired tear gas to disperse protesters. Video footage from the ground shows people rushing into a subway station to escape the gas, and a massive crowd chanting "murder" as they march past luxury fashion shops.

Several subway lines experienced minor to severe delays, with some stations closed and routes partially suspended "due to an escalation of the situation in stations," according to the MTR subway operator. At least five universities have closed and canceled classes on Monday.

According to Tse, an officer was arresting a protester when another protester ran towards him. The officer pulled his gun, and then shot it, as he believed the protester would attempt to snatch his gun which could result in "death and casualties," Tse said.

A video clip of the shooting shared online shows the traffic officer grappling with a protester. A second protester, dressed in black and wearing a face mask, approaches the scuffle, and the officer raises his gun.

The second protester appears to try and wave or slap the gun away, and the officer shoots him at close range, to screams from the surrounding crowd of protesters and passersby.

Several more protesters then grapple with the officer, and two more live rounds are fired off-camera.

Police officers have since cordoned off the area where the protester was shot.

In a statement , police responded to "online rumors" of reckless firearm use, calling the accusations "totally false and malicious."

"Police (have) strict guidelines and orders regarding the use of firearms," the statement said. "All police officers are required to justify their enforcement actions."

The anti-government protests, which began in June in opposition to a now-withdrawn extradition bill, have dragged on for five months . The bill's withdrawal satisfied just one of the protesters' five major demands, which include an independent inquiry into alleged police brutality and wider democratic reforms.

In response to the demands, the government appointed a panel of overseas experts to assist Hong Kong's longstanding Independent Police Complaints Council (IPCC), which is conducting a fact-finding study into alleged police misconduct during the protests.

But on Saturday, one of the experts tweeted a copy of the panel's progress report, criticizing the IPCC's investigative capabilities, and saying it needed to "substantially enhance its capacity" to assess evidence from witnesses and assemble a coherent account of the facts.

The IPCC said it was "disappointed" that it was not consulted before one of the overseas experts made the progress report public. On Sunday, the Hong Kong government said the IPCC's study would be "by no means a final report."

The nonstop protests have also sent retail and tourism numbers plunging, and the semi-autonomous city fell into recession in October. Travel is dropping as demonstrations escalate in violence , and there is increasing public hostility toward the city government and police force.

This isn't the first time a protester has been shot -- police first used lethal force in October by firing a live shot and injuring an 18-year-old man.

But things kicked up a notch on the weekend, with raging protests fueled by anger over the death of a 22-year-old student .

Chow Tsz-lok, a computer sciences student at Hong Kong University of Science and Technology (HKUST), died on Friday morning, days after falling and suffering a severe head injury in a parking garage close to the scene of protests.

Chow had been in a coma and on life support until Friday. There is no indication that Chow was involved in the nearby protest the night of his injury.

Protesters and fellow students mourned his death throughout the weekend, with a vigil on Friday night and a memorial on Sunday. HKUST students left flowers and messages on Post-it notes on campus, and vigil attendees laid flowers and lit candles.

Chow's death also prompted an outpouring of anger from anti-government protesters, who claim that police actions on the night of the accident resulted in paramedics being temporarily unable to access him.

This anger spilled out during the weekend protests, with protesters on the streets shouting for "revenge."

Police expressed "profound sadness" over Chow's death, but have strenuously denied responsibility and maintained that at no point did officers obstruct ambulance or fire services from assisting him. A police statement released on November 5 described the allegations as "certainly false."

According to police, ambulance crews arrived at the scene on November 4 approximately 19 minutes after being called. Hong Kong's ambulances pledge to arrive at the scene of the incident within 12 minutes of a call.